Women in the built environment

Please join the National School of Architecture and Urbanism (ENAU) and U.S. Embassy Tunis for a panel discussion with Tunisian and American women architects and designers. Panelists include American diplomats from the U.S. Embassy as well as Tunisians who formerly participated in Embassy programs. The speakers will reflect on their careers in the fields of architecture and design, will share advice for women interested in pursuing these fields, and will engage in a Q&A with the audience. The discussion will be moderated by professor Samia Gallouzi from ENAU.

The National School of Architecture (ENAU) at “Le Petit Amphi”

Amy Hetletvedt | Architect at the U.S. Embassy in Tunisia
Amy Hetletvedt is a licensed architect, preservationist and writer whose work has focused on heritage conservation, community architecture, and global practice issues. Among other professional and volunteer positions, Amy has served as a Historic District Commissioner for the City of Detroit and an editor for the Netherlands-based platform Architecture in Development. Amy has participated in architectural education in West Africa and Europe. Her writing has appeared in Slate, ArchDaily, Docomomo, and other design-focused publications. She holds a Bachelor of Science in Architecture degree from the University of Michigan and a Master of Architecture degree from the University of Washington.

Imen Farah | CEO of Khalta Shop
Imen Farah graduated from the National School of Architecture of Lyon in 2012. She gained two years of experience in architectural firms before reconnecting with a childhood friend and founding an architectural agency together. After 9 months of research they developed the best recipe for a unique fiber-reinforced concrete. In September 2016, Khalta unveiled a collection of concrete and minimalist decorative items, lighting and tableware. Since then, Khalta has come a long way, continues to develop its collections and expand in Tunisia and internationally.

Sihem Lamine is the Administrative and Program Manager of the Tunisia Office of the Center for Middle Eastern Studies at Harvard University. Prior to her role at Harvard CMES Tunisia, she worked as an architect for more than fifteen years, first as a project architect in a ship-design practice, Seine-Design-Paris, then as co-founder and partner, with Jean Baptiste Barache, of an award-winning architecture studio, Arba-Paris. Sihem holds a diploma in architecture from the Ecole Spéciale d’Architecture, Paris and a master’s degree in History of Islamic Architecture from the School of Oriental and African Studies, University of London. Her research interests focus on the urban history of the city of Tunis, the Zaytuna Mosque as a singular example of Islamic architecture in the Maghreb, and the policies and practices of heritage preservation. She recently published “Colonial Zaytuna: The Making of a Minaret in French-Occupied Tunisia,” an article in Muqarnas: An Annual on the Visual Cultures of the Islamic World sponsored by the Aga Khan Program at Harvard University.

Sonia Miranda-Palacios | Architect at the U.S. Embassy in Tunisia
Sonia M. Miranda-Palacios is a diplomat and licensed architect working for the Bureau of Overseas Buildings Operations within the Department of State. She has specialized in sustainable design, teaching and construction, and has served as Construction Manager for the US Embassy Maputo in Mozambique, and the US Embassy Mexico City in Mexico. Before joining the Department of State, she had her own architectural firm and practice in San Juan and was a Design and Technology professor at the School of Architecture of the University of Puerto Rico. Her latest publication on Women in Construction was featured at the State Magazine last December 2021: Women of OBO Construction – State Magazine. She holds a Bachelor of Science in Geography degree from the University of Puerto Rico and a Master of Architecture degree from the Massachusetts Institute of Technology. 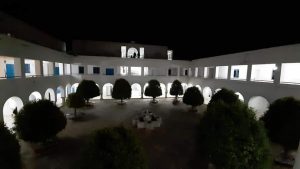